"THERE’S GOLD IN THEM THAR GUMS" 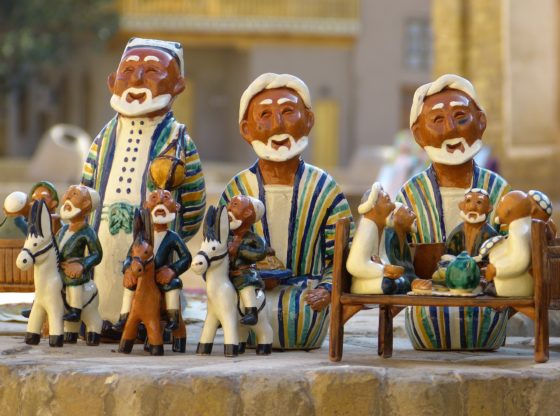 Adelaide,adventure,architecture,Asia,Australia,bazaars,bhukara,Central Asia,cuisine tourism,Eurasia,gold teeth,holiday,jetsetter,khiva,Luxury Travel,madrassa,minarets,postaday,samarqand,silk road,South Australia,Summer,tashkent,The Dont Forget Travel Group,travel,travel hacks,uzbekistan,vacations,winter |
There is shades of blue everywhere. There’s shades of blue in the tiles. There’s shades of blue in the sky. There’s shades of blue the domes of the mosques. There’s shades of blue on the facades of the madrasahs. There’s shades of blue in the hand woven rugs and the tourist embroidered skullcaps. You would think that this is the colour that would be most memorable, but blue isn’t the colour that will stick in mind about Uzbekistan. The colour that I will mostly remember is gold. Not the golden glow emanating from the sun, or the colour of the adobe walls in the afternoon light, not the gold from the jewellery glistening in the bazaar, not the shiny gold from the crescent moon atop the mosques, not even the golden mosaics in the Golden Mosque in Samarkand. Its the colour of the Uzbek’s smile that will stay with me. When an Uzbek smiles, they glow. Not because of a great dental routine, but probably because of a lack of it (and the ubiquitous green tea that they like to drink really sweet). A large percentage of the older population have gold teeth. The first time I came across this it was like Central Casting had cast a stereotypical James Bond villain. His mouth was all precious metal but with none of the precious enamel stuff. Were not just talking about one or two teeth, we’re talking the whole mouth. There was so much gold that it could have easily set off a gold rush frenzy like there hasn’t been seen since the California gold rush of 1850. It wasn’t just the men either, in fact I think I saw more women wearing more gold in their mouths than on their fingers or around their necks. I couldn’t get a straight answer whether this was fashion or medical as I received conflicting replies to my questions. Some say ceramic teeth weren’t available, others said it was a status symbol and the more gold teeth you have the wealthier you are. Some say that the President has now banned the practice. All I know is that I received many comments on how lovely my teeth were (and if they were real)….my parents will be happy to know all that money and time spent at the dentist was not waisted as my teeth are a big hit in Uzbekistan. The Dont Forget Travel Group is a boutique agency that specialises in custom-made holidays. Follow us on Facebook and Instagram Contact us through www.dontforgettravel.com.auor email info@dontforgettravel.com.au
Uzbeki-where? Uzbeki-why?
"Table for one, Please"

AIRELLES~GORDES La Bastide ⚜️ In the heart of

I'm just doing it for the science! My bank details

If garden design is your thing, then you need to

Do you want a Dewey Decimal haircut? - - - #badjok

Mezapos is a little village in the Man region on t

Anyone else feel the same? - - #borntotravel #for