The Olympics and Me…the unknown Olympian! 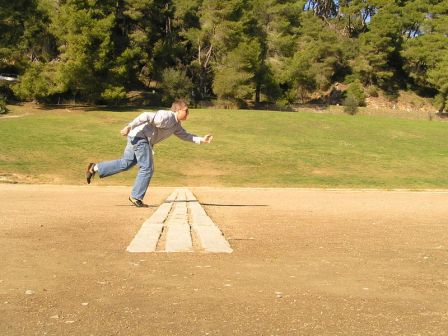 I love the 5 ring circus that is the Olympics.

I have been an Olympic tragic since my first memories of the Munich Olympics back in 1972. While I was too young to understand the tragedy unfolding on the TV, I was fascinated by the competition, and the young Shane Gould tearing up the competition in the pool. For 2 weeks every 4 years I become an expert in all sports and come out with such pithy quips as “she really stuck that landing” or “that was a sharp clean and jerk” despite never having been a gymnast or a weightlifter. I have never attended an Olympic Games, or been at a standard in any sport to compete at an elite level, but that doesn’t stop me claiming to be an Olympic Athlete.

My “Olympic dream” was realised when I competed in the Yiros Athinas Olympic Day Run.

Despite having Yiros in the name, it did not consist of kebab stops along the route as apparently Yiros also means circular, or round or something. 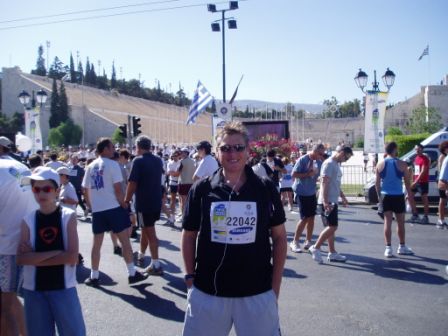 The Olympic Day Run is an 8km circuit around some of the sites in the centre of Athens. It started at Panathenaic Stadium (you might remember this as the site of the first modern Olympic Games in 1896) through to Syntagma Square, up to Omonia Square, through Psirri, Monastiraki and Thissio, around the Acropolis, through the Plaka and finished in the National Gardens next to the Parliament Building. It was a bit like the City to Bay (or Surf depending where you come from) except you were running on old, uneven, cobblestone roads, up and down hills and around ancient monuments. The starting gun went off at 10am, so as not to be ran in the heat of the day (luckily it was only 26 degrees – but it felt like 35 degrees), but I have my suspicions that it was to allow everyone to get home from the night before. 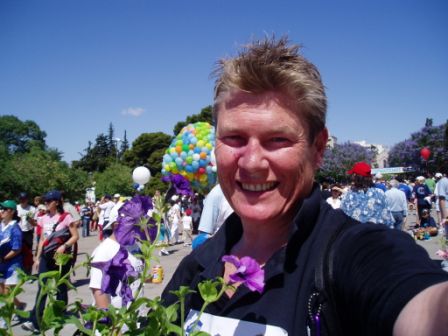 It was an enjoyable run, if you can ever call running enjoyable, and I completed the 8kms in 46.53 minutes (it took double that time again for the redness to finally drain from my face). At the finish line you were handed your “International Olympic Committee’s Olympic Day Run” certificate and a potted Petunia plant. I never did work out the significance of the Petunia, or if there was actually any significance to it at all, but I didn’t mind because I now had a certificate that proved that I was an Olympic Athlete.

During the 2004 Athens Olympics, The Olympic Athletic Centre of Athens, also known as OAKA Stadium, was the focus of many athletic feats, none that featured me!  Despite being an adopted Panathenaikos supporter (Go Greens!), I went with Stelios, Giorgos & Nikolaos to watch AEK Athens play AC Milan at the Olympic Stadium. Also in attendance was another 60,000 screaming AEK fans all dressed in yellow and black. 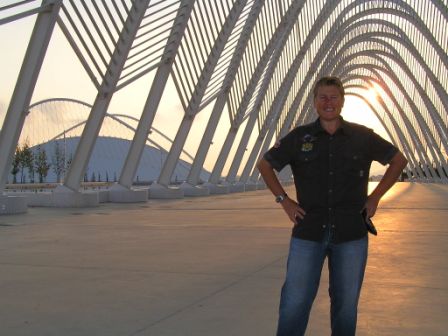 This game was part of the UEFA Champions League and was extremely important for AEK to win if they were to advance to the next round. Even though AEK hadn’t enjoyed much success on the international stage, and weren’t expected to win, you wouldn’t have known by the enthusiasm of the supporters who sang, chanted and taunted nonstop throughout the whole game. I learnt a new phrase: “AEK gamma tin Milan tin poutana” (I am not going to translate it, ask your local friendly Greek – but not their mothers – if you want to know what it means!!!!) as it was sung constantly for 90 minutes. The singing was only interrupted by the oohs and aahs of the “near miss” or “what could have been” that is so prevalent in this game

Packed to near capacity and with 59,999 smokers, and me, the lone non-smoker, there was such a smoke haze that hung over the pitch you felt you were watching the game through a thick fog. Of course adding to this “fog” was the smoke from the ubiquitous flares that no self-respecting European football match would be without.

Oh, by the way, AEK upset AC Milan with a 1-0 win– which made the atmosphere even more incredible.

Is it possible to become immune to beauty?

This is the question I was myself asking as I’m looking around the ruins of Olympia thinking…  “…yep, more fallen down columns and scattered rocks”.

The problem with having seen so much of Greece is that it is hard to not compare sites. If I had been to Olympia when I first arrived, I would have given it the “ooohhhs and aahhhs” it truly deserves, but when I first walked into the ancient site I had a feeling of “ok what’s next?”. Where is the stadium? Where is the cauldron and flame? Where’s the winner’s podium? Where’s my olive wreath?

What I had forgotten (or failed to realize) was that the original Olympics was all about the worship of Zeus and not about “building worldwide peace and harmony through sporting contests”. There are many fallen down temples throughout the large site nestled in the wooded valley on the western regions of the Peloponnese. It wasn’t until I passed through the archway into the ancient “stadium” that I actually had a sense of the place. While the stadium doesn’t have any seating (and apparently never did – standing room only for the 45,000 spectators) except for the “VIP box” it does have a sense of grandeur. Embedded in the ground of the old arena is the marble starting blocks, so what else could I do but try them out…as you can see from the photo, the style is not that of an Olympic runner. But as it is winter, there wasn’t anyone around to critique my technique.

The modern museum built deep in the woods is quite fascinating and well worth a look as it houses all the amazing relics, statues and friezes that have been excavated on the site.

Back in Olympia, after departing the site, I entered the only souvenir shop open in the main street, and after the usual “where are you from? Melbourne?” (everyone in Greece appears to have a relative who lives in Melbourne and they want to know if you know them!) the owner told me that he actually ran the 200 metres in Tokyo (1964), but not very well and that his best Olympic achievement was that he collected Olympic Torches and had every one since 1948, except Melbourne (1956), but he wasn’t too worried because apparently the Melbourne torch was an exact replica of the London 1948 torch, and he had two of them anyway. We played the “Guess Which Torch Belongs To Which Olympics?” Game of the 10 that he had in the back room of the store…I must admit the distinctive Sydney 2000 Torch really stood out for its design and colour when compared to “standard” designs of many of the others. I was having so much fun with this gentleman that I didn’t even get a photograph of him and his fascinating collection!!!!

Despite “inventing” the marathon, the Greeks don’t run!

The newspaper said that of the 3500 people registered to take part in the Classic Marathon, 10km and 5km Road Races, 80% of them were foreigners. It’s not surprising as it’s very difficult to combine the national past-times of smoking and coffee-drinking, with running.

Luckily the forecasted sleet and snow flurries didn’t eventuate. I don’t even know what a “flurry” is, but I’m glad it didn’t appear. It was a clear day, but a bone-chilling, bitterly-cold 4C. At 9am, the starting pistol echoed around the empty marble Panathenaic Stadium as the 10km & 5km participants surged forward, eager to get underway. For me, I was just keen to get some blood circulating and get some warmth into the body. The serious runners already had a half-hour head start 42.2kms away at Marathonas.

500 metres into the race, I realised I had broken one of the cardinal rules of “marathon” running –Don’t run on a full stomach! Before the start one of the sponsors “GU” was handing out little packs of coffee-flavoured “Energy Gel”. The sickly sweet paste is designed to give you a boost of energy (and I was hanging out for a coffee as I hadn’t had one yet), but the initial boost wore off really quickly and all I could feel was the sticky substance bouncing around in my stomach bringing on feelings of nausea.

At the 1km mark, still feeling nauseous, there was a void of energy left behind after the effects of the energy gel wore off. It was then that I realised that I had broken another cardinal rule of “marathon” running – Don’t go out until 3am 48 hours before a race – no wonder Greeks don’t run! Preparation really wasn’t ideal.

At the 2km mark, still feeling sick and low on energy, the reality of another broken rule hit –NEVER run in new, untested shoes! My brand new runners started pinching me in the weirdest places. I was already beginning to think that no-one would know if I pulled out – after all I already had the t-shirt, towel and key ring that the Organising Committee give you on registration. I had already taken a few photos to prove that I was there. No-one would ever know.

I would like to say that was when the true Olympic spirit kicked in and how I dug deep and thought about the endurance of Pheidippides and how upon arrival in Athens shouting “We’ve won!” declaring the Greek’s defeat of the invading Persians, before dropping dead at the foot. The truth is, I became a bit of a Forrest Gump, just turned up the volume on my iPod, so I couldn’t hear the screaming going on in my head, and just kept going.

The winner (Kenyan, of course) of the full Marathon arrived into the stadium about 45 minutes after I completed the 10kms. Very impressive. Luckily I did complete the course as I received a participation medal (that if you squint, could be mistaken for a gold medal) as well as a Diploma, so it was worth it and I get bragging rights that I have competed in the Athens Classic Marathon – the true Marathon!