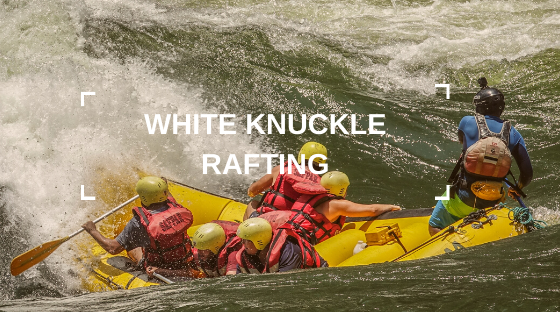 “From beyond Oblivion and back”

Fuuuuuck, is this what it feels like to die? The water engulfed me and suck me under. I was flailing my arms, kicking my legs. I was reaching for the surface. I was praying for the surface, but all I could feel was more water. I was in a washing machine with the setting set to “heavy duty wash”. I thought I could see the surface, but I was so disorientated that I don’t actually know what I saw…but it wasn’t the surface. I was tumbling around even more, I swallowed some water (oh great, if I survive this, I will probably die from some parasite that I have just ingested!), I could feel a bit of panic setting in.

Two minutes ago it was an exhilarating experience. I was feeling pretty good about myself. I was sitting in the bright yellow raft riding the rapids. We were like one – a well-oiled machine. We were like a couple of dancers doing the tango, our bodies had melded into one and moved as one. I rode the waves, held on when they peaked, we ebbed and flowed, moved with them when it felt like we were going down a big face into a water gully. When a wave came at us from the side, I took the impact and rafted through them…I was rafting like a pro.

We had already conquered 17 of the 21 rapids up to this point – with names like Devil’s Toilet Bowl, Stairway To Heaven, The Three Ugly Sisters, Midnight Dinner, Gulliver’s Travels, The Wall etc. There was even a few “free” rapids that were deemed too minor to be given a name or be included in the total rapid count.

We did avoid Rapid #9, named “Commercial Suicide” and this rapid is so bad that we had to get out of the raft and walk over rocks to avoid it.

The overall trip is 20kms long and we had already paddled about 17kms, so we were pros.

When I say “we were pros”, I actually meant me and the rafting guide, Henry, were pros. I was allocated a raft with 4 Brazilians who were treating the rafting like a leisurely punt on a local inner-city pond. There was a lot of singing, football chants and bouncing up and down….it was like Mardi Gras in Rio or a World Cup final, but there wasn’t a lot of paddling. I could see Henry getting a bit frustrated every time he yelled “paddle fast, NOW!”, “Come on dig in”, “PADDLE NOW!”…the response would be a light-hearted, pathetic uncoordinated paddling that barely touched the water, followed by a rendition of “here we go, ole, ole, ole, go, go go ole, ole ole” or some other Ricky Martin sounding song.

Henry had given us a pep talk leading into Rapid Number 18…called “OBLIVION”. He said he needed a concerted effort from everyone and that we needed to hit this rapid with some speed which meant that we had to paddle hard, and in unison. He said that Oblivion has a 90% flip rate. Oblivion is why the Zambezi is nicknamed “the Slambezi”. We had watched another raft successfully negotiate Oblivion, and it was our turn.

This is what is said about this infamous rapid…

“OBLIVION, RAPID #18
Famous throughout the world for its huge crashing hole causing flips, surfs
and tube stands. One of the highlights of the Zambezi, it can be avoided if
a little nervous of its reputation, biggest in September, October and
November”

“Come On, paddle hard”, Henry encouraged us “We’ve got this”

But the inevitable happened…… 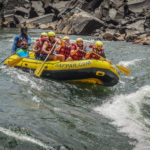 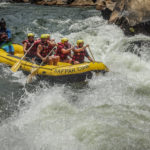 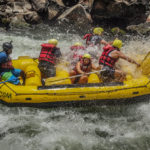 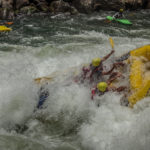 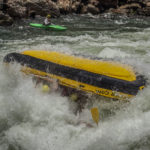 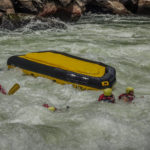 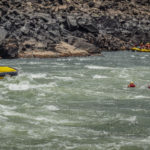 This is why I am in the predicament I’m in: drowning.

I’m now swirling around trying to find the surface and worried about being eaten by a croc or being killed by the bugs I’ve swallowed or being trapped under the raft or just plain drowning. Then I feel the hands of God, in the form of Henry, grab my lifevest and pull me onto the upside-down raft. I laid there gasping for breath.

The Brazilians were still floating down the river…ole, ole, ole! So I helped Henry to right the raft to go after them. Henry had broken his paddle during the ordeal, but “miraculously” I had managed to hold onto mine during my near death ordeal, as it was more important for Henry to have a paddle, he took it from me. After rescuing the Brazilians, I got my revenge as they had to paddle the rest of the way without my help. For the rest trip, I sat just sat back and let the world drift by.

An edited version of http://www.safpar.com video that you get at the end…

The Batoka Gorge is quite spectacular when you have the time to take it all in. And when the lightening storm began, it just added to the drama of the day.

The final three rapids were relatively tame and without incident.

Once we reached our final point we beached the rafts and had to hike the 1km out of the steep gorge. It was a vertical ascent that I wasn’t prepared for…it was a killer. You are climbing the 180m via switchbacks and rickety “ladders” made from branches tied together with some twine. This bit of the trip was not fun. 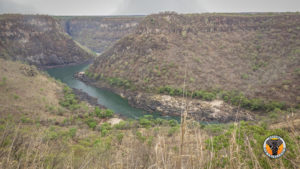 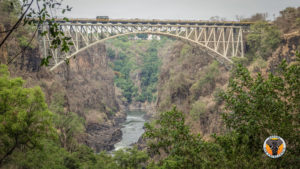 The rafting was excellent, but the final climb out of the gorge was shit….but more importantly…. I came back from Oblivion.

My emotion levels before and after the rafting experience…

THE CINQUE TERRE: EXPLAINED
THE 7 ESSENTIAL TRAVEL TIPS FOR FIRST TIMERS TO EUROPE

[instagram-feed]
Notice: WP_Scripts::localize was called incorrectly. The $l10n parameter must be an array. To pass arbitrary data to scripts, use the wp_add_inline_script() function instead. Please see Debugging in WordPress for more information. (This message was added in version 5.7.0.) in /home/dontforg/public_html/wp-includes/functions.php on line 5775