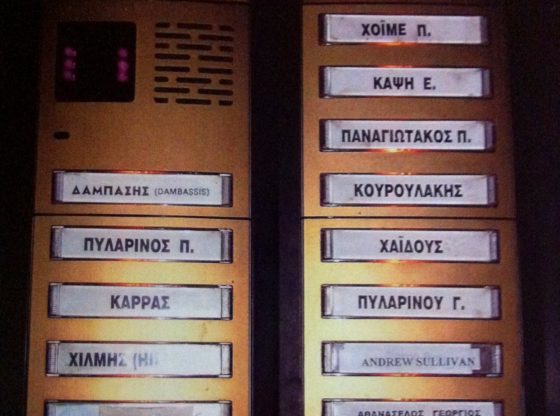 “Threshold: Any place or point of entering or beginning”

At first I thought that this week’s photo challenge was too hard as no images immediately came to mind. Then it hit me that there has been to momentous occasions in the last 10 years that have been significant to me. I had truly stood on the threshold of a new beginning. I felt, immediately prior to both events, like I was standing on the edge of the precipice and about to jump into the unknown.

This photo symbolises the first threshold as I had been asked by my employer to relocate to Athens to work for our Greek operations. This is the doorbell for my apartment block in Athens. Amongst all the names ending in “–opoulous” or “–oulakis” is a lone Anglo-Saxon name. Mine. That was what I was afraid of; feeling like a fish out of water. I didn’t know the language. I didn’t know anyone in the whole continent, let alone the country and definitely didn’t know a soul in the actual city itself.

I was on the threshold of a new love.

I had nothing to worry about as I was welcomed with open arms. I was accepted and included. I made some lifelong friends. I had some incredible experiences and saw some spectacular countryside and visited many beautiful islands. I fell in love with the country, culture and cuisine- and was made an honorary Greek – Sullivanopoulos.

I have cheated on the second momentous threshold as it is a video not a photo. After 20 years of a career in advertising and media I had had enough. “Pillars of change”, “departmental silos”, “mission statements”, “touchpoints” were just jargon and lost all meaning. A world where people were not dismissed but were “offered the opportunity to seek their personal goals elsewhere” now felt shallow and callous. I felt I wanted to control my own destiny.

I made the scary decision that I was going to leave the sheltered world of corporate life and open my own business. A travel agency, no less! Despite being a crowded marketplace, both online and real bricks and mortar, I felt there was room for a boutique agency.

This is the video I made about the process of setting up the new agency. I had imported the furniture from China and 40+ boxes only had a picture of the furniture, but no instructions.

I was on the threshold of a new life.

This new beginning is still continuing.

The Don’t Forget Travel Group is taking part in the Weekly Photo Challenge with the added challenge of trying to make all photos travel related. #postaday

And with this week's weather forecast, it's unlike

"Dive in" to the Greek Island you probably have ne

We're starting the week off on a very bumpy road..

What's missing? Us! Tzia is a small island not fa

The world needs a little bit of TLC right now - -