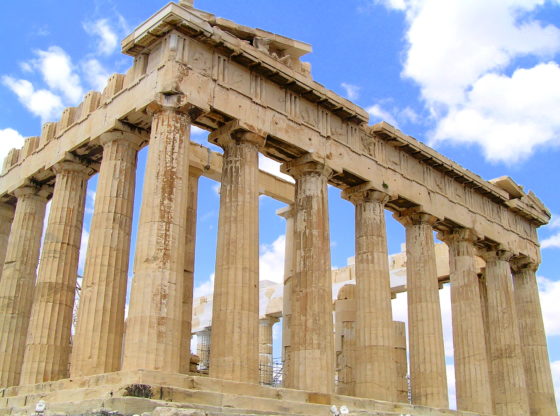 The challenge this week is “Monument”. After all the sites I have been fortunate to have seen, this was one of the easiest photo challenges. Once I started sifting through the digital photos  I realised that one particular monument kept on standing out…..The Parthenon.

The Parthenon sits proudly, and defiantly, atop the Acropolis for all to see. Sometimes she is naked, and other times she is shrouded in mystery when she is covered by scaffolding. I love the fact that you can see The Parthenon  from almost anywhere in central Athens. I always get a “warm and fuzzy” when walking down a little Athenian alley and suddenly catch an unexpected glimpse of The Parthenon. I don’t know why I have this reaction.

Originally built as a temple dedicated to the goddess Athena, The Parthenon has also been a treasury, a mosque as well as a munitions dumped which resulted in an explosion that caused extensive damage.

Like a Greek cabbie instinctively drawn to taking the most costly route, I am drawn to visit The Parthenon every time I am in Athens. I feel a trip to Greece is incomplete without paying homage to this amazing monument.

The Don’t Forget Travel Group is taking part in the Weekly Photo Challenge with the added challenge of trying to make all photos travel related. #postaday

Where function, design and practic aslity meet! A

Czech it out...a travel pun (Ed: it should be quar

Jemaa el-Fna is the heart of Marrakech and at nigh

Wouldn't you love to be here right now? It conju

Reduction: the act of making ducks smaller. I do