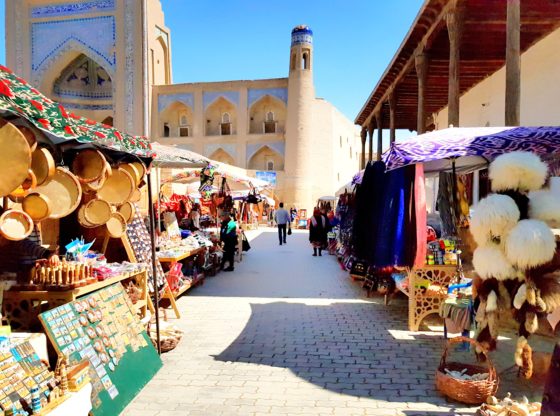 Adelaide,adventure,Airlines,architecture,Asia,Australia,bazaars,Beijing,bhukara,Central Asia,China,cuisine tourism,Eurasia,food tourism,holiday,jetsetter,khiva,Luxury Travel,madrassa,middle east,minarets,postaday,Restaurant,samarqand,silk road,Summer,tashkent,The Dont Forget Travel Group,travel hacks,uzbekistan,vacations |
“Where’s that , and why?” was the most common response when I told people that Uzbekistan was my next destination. I must admit, I haven’t always known where it was, or why I wanted to go there myself. Located in Central Asia, with China to the east, Russia to the north, Iran to the south and Turkey to the west. Uzbekistan is a double landlocked countries…which means that it is a land locked country surrounded by land locked countries as its most immediate neighbours. It is in an area which is now being referred to as the “Stans” – Kazakhstan, Kyrgyzstan, Tajikistan, Turkmenistan and Uzbekistan. I have had this “latent” fascination in the Silk Road. It has always conjured up images of camel caravans wandering over deserts laden with goods from far away places; stories of Aladdin, Ali Baba and 1001 Arabian nights; yurts in the east and desert oasis camps in the west; turban-topped men brandishing scimitars; veiled women dancing to Dayera drums; and Marco Polo having the first ever Gap Year. Without realising it, in previous travels I have completed sections of the “Silk Road” from Rome to Turkey and then a few years ago I actually took a Silk Road tour through the Chinese section from Beijing to the farthest western most point in Kashgar. I now have a desire to fill in the middle sections and as it turns out, Uzbekistan is right in the centre of the Silk Road, and Samarkand is right at the cross roads making it at the centre of the ancient trading route. It is a misconception that the Silk Road was one long road from Rome to Istanbul to Beijing. It was in fact many different routes that all lead into the main route. There were offshoots from Persia, India, Russia and Mongolia among others. That is the where. The architecture is the why…..think blue dome topped mosques, imposing facades of the madrassas, and the bazaars. The history and the culture, is also the why…..Uzbekistan has been conquered by many of the thousands of years, such as Genghis Khan, Tamerlane, Alexander the Great being the most well known of the ancient rulers, and in more recent times the Russians and the Soviets. Each left their imprint on the country, but did not eradicate their culture. The country has made it easier to visit. While it has never been completely closed off, it was quite expensive and laborious to get a Visa until the current President abolished visas for most countries to encourage tourists. To the traveller, Uzbekistan has always had a sense of adventure, a magical and exotic place, and now it is easier to fulfil this dream. So go, before everyone else does.. The Dont Forget Travel Group is a boutique agency that specialises in custom-made holidays. Follow us on Facebook and Instagram Contact us through www.dontforgettravel.com.auor email info@dontforgettravel.com.au
DOES ANYONE KNOW WHICH WAY TO PETRA?
"THERE’S GOLD IN THEM THAR GUMS"